Time is running out to file H-1B visas for this year.  United States Citizenship and Immigration (USCIS) announced that 50000 of 65000 allotted visas for the Fiscal Year have been used.  We estimate that the remaining 15000 will be used by mid-December at the latest. 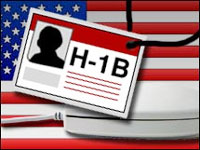 The H-1B visa program enables U.S. employers to hire highly educated foreign professional workers for “specialty occupations” — jobs that require at least a bachelor’s degree or the equivalent in the field of specialty.  These foreign workers provide needed specialized or unique skills, fill a temporary labor shortage and/or supply global expertise.  Holders of these visas can stay in the United Statesfor up to six years.

What does that mean for you? After the H-1B cap is reached, private employers cannot hire new temporary professional workers in H-1B status for this fiscal year and will have to wait until April 1, 2012 to file H-1B petitions for a start date of October 1, 2012.

WHY THE H1-B VISAS CUT-OFF?

H-1B visas are limited to 65,000 per year.  However, certain cases are exempt from the cap.  This numerical limit is further reduced by free trade agreements that specifically allocate 6,800 H-1B visas for nationals ofSingaporeand Chilemaking only 58,200 visas available in the standard H-1B pool.

WHO IS EXEMPT FROM THE H1-B CAP?

The following cases are exempt from the H-1B cap: 1) extensions for current H-1B workers, whether for a new or existing employer in sequential employment situations; 2) concurrent employment in a second H-1B position; 3) amended petitions; 4) H-1B employment for nationals of Chile or Singapore, 5) petitions for new employment at an exempt organization such as a nonprofit research organization, an institution of higher education or an affiliated non-profit entity and 6) 20000 H-1B visas for graduates of U.S. universities who have earned a Master's or higher degree (the Cap has also been reached for these graduates).