Although Judge Bolton's ruling is not final, it seems likely to halt, at least temporarily, an expanding movement by states to combat illegal immigration by making it a state crime to be an immigrant without legal documents and by imposing new requirements on state and local police officers to enforce immigration law. It sets up a lengthy legal battle that could end up before the Supreme Court – ensuring that a controversial law, which inspired similar measures nationwide, created fodder for political campaigns and raised tensions with Mexico will stay in the spotlight. 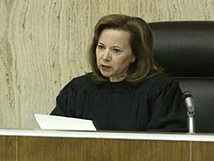 Judge Bolton did allow some, less debated provisions of the law to go into effect, including banning ordinances for "sanctuary cities" that  have deemphasized their policies for alerting federal agents about illegal immigrants.

But Judge Bolton found that the law was on the side of the Justice Department in its argument that many provisions of the Arizona statute would interfere with longstanding federal authority over immigration and could lead to harassment of citizens and legal immigrants.

“Preserving the status quo through a preliminary injunction is less harmful than allowing state laws that are likely pre-empted by federal law to be enforced,” she said.

“There is a substantial likelihood that officers will wrongfully arrest legal resident aliens,” she wrote. “By enforcing this statute, Arizona would impose,” she said, citing a previous Supreme Court case, a “ ‘distinct, unusual and extraordinary’ burden on legal resident aliens that only the federal government has the authority to impose.”

“This fight is far from over,” said Ms. Brewer, whose lawyers had argued that Congress granted states the power to enforce immigration law particularly when, in their view, the federal government fell short. “In fact,” she added, “it is just the beginning, and at the end of what is certain to be a long legal struggle, Arizona will prevail in its right to protect our citizens.”