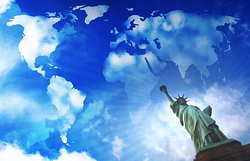 On June 15, 2012, U.S. Secretary of Homeland Security Janet Napolitano and President Barack Obama announced that, effective immediately, certain undocumented youth who were brought to the United States as young children, who do not present a risk to national security or public safety, and meet several key criteria will be considered for relief from removal from the country or from entering into removal proceedings. Under the administration plan, certain unauthorized immigrants, will be able to avoid deportation and obtain work authorization if they can satisfy specific key criteria:

Only those individuals who can prove through verifiable documentation that they meet these criteria will be eligible for deferred action and work authorization. Individuals will not be eligible if they are not currently in the United States and cannot prove that they have been physically present in the United States for a period of not less than five years immediately before June 15, 2012. Types of evidence include but are not limited to school records, medical records, high school diploma or GED certificate. Those who demonstrate that they meet the criteria will be eligible to receive deferred action for a period of two years, subject to renewal, and will be eligible to apply for work authorization.

In a change from the prior announcement, people currently in removal proceedings will use the USCIS process when it is implemented on August 15, 2012, rather than go through ICE. Only individuals in detention will go through ICE to make a deferred action request. Requestors will use a form developed for this specific purpose.

We have attached copies of the pertinent applications and instructions for your review.