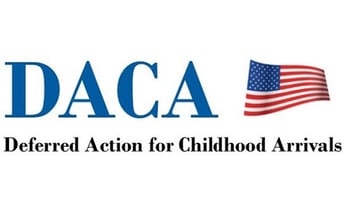 The Deferred Action for Childhood Arrivals (DACA) is an American immigration policy that allows some individuals who were brought to the United States illegally as children to receive a renewable two-year period of deferred action from deportation and become eligible for a work permit in the United States.  It is important to note that DACA provides temporary residency, it does not provide a path to citizenship for its recipients.  According to the United States Citizenship and Immigration Services (USCIS), you may request DACA if you:

DACA was announced by President Barack Obama in June 2012 and the USCIS began accepting applications for the program in August 2012.  In November 2014, Obama announced his intent to extend DACA protection to additional illegal immigrants.  Although many states sued to prevent the expansion, their attempt was ultimately blocked by the courts.

In June 2017, the United States Department of Homeland Security rescinded the expansion of DACA, while continuing to review the program as a whole.  In September 2017, Attorney General Jeff Sessions announced that the program was being repealed.  The administration alleged that DACA negatively impacted the U.S. economy, was the primary cause of the surge in unaccompanied minors coming to the United States from Central America, and was on its face “unconstitutional.”

Sessions explained that implementation would be suspended for six months and that DACA status and Employment Authorization Documents that expired during the next six months would continue to be renewed.  DACA recipients with a work permit due to expire prior to March 5, 2018 would have an opportunity to apply for a two-year renewal if their application was received by October 5, 2017.  Trump then announced that the approximately 800,000 immigrants granted deferred action under DACA over the last several years who qualified for DACA would become eligible for deportation by the end of those six months.

The Debate over DACA goes to the Courts

The issue over whether DACA should be repealed quickly hit the courts.  There have been a number of legal challenges to the rescission. On September 6, 2017, fifteen states and the District of Columbia filed a lawsuit, in the U.S. District Court for the Eastern District of New York attempting to stop the repeal.  Several days later, California filed a similar lawsuit, which was joined by the states of Maine, Minnesota and Maryland, in the Central District for the Eastern District of California. Although the judges in these cases did not rule on the merits of the suits, they did issue nationwide injunctions to keep DACA in place until the government could articulate a sufficient reason for its repeal. Then in March, the U.S. District Court for the district of Maryland issued a preliminary injunction prohibiting the Department of Homeland Security from sharing DACA recipients’ personal information for enforcement purposes against them unless that person poses a threat or has committed certain crimes. Finally, in April, the U.S. District Court for the District of Columbia issued a ruling in favor of maintaining the DACA program (at least temporarily).

In early May, however, Texas Attorney General Ken Paxton filed a lawsuit on behalf of seven states challenging DACA.  The lawsuit, joined by Alabama, Arkansas, Louisiana, Nebraska, South Carolina and West Virginia, alleged that the Obama administration abused its authority with the creation of DACA.  The suit called for the United States District Court for the Southern District of Texas to “immediately rescind and cancel all DACA permits because they [we]re ‘unlawful’ and ask[ed] the court to block the government “from issuing or renewing DACA permits in the future, effectively phasing out the program within two years.”

With conflicting lower court opinions on the lawfulness of DACA, it appears likely that the end result will be a showdown in the Supreme Court.  Ironically, although the political parties stand on different sides of the debate over the DACA program, both have criticized the breadth of presidential power in immigration (something the Republicans criticized when Obama was in power and something the Democrats have had issue with since Trump took control).  The Supreme Court’s ultimate ruling on this issue will have nationwide implications for hundreds of thousands of immigrants and for the U.S. economy as a whole.